Treating residents to a diverse menu that’s fresh and healthy has always been a priority for Trillium Woods, and resident Linda Erlandson Frost has taken that to the next level by establishing and managing our Trillium Woods community garden.

When Linda moved to Trillium Woods in 2017, sustainable food cultivation was at the top of her list of interests. After Linda joined the community, she worked with Trillium Woods to establish a 20×20 ft. garden plot on campus that has since grown to 70×80 ft., which Linda and a few fellow residents manage organically.

Under Linda’s supervision, the community garden has produced approximately 125 pounds of green beans, cantaloupe, cucumbers, summer squash, zucchini and garlic this season. The bounty is picked daily and incorporated into meals served fresh from the Trillium Woods kitchen.

“I told the chef one day I don’t want this to be farm-to-table,” said Linda. “I want it to be vine-to-table, so what time do you want the green beans?” 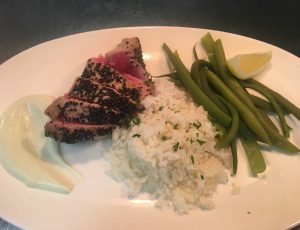 Linda has always been passionate about gardening and sustainability. She’s been growing vegetables nearly all her life, first selling them at the Minneapolis Farmer’s Market when she was in junior high. In the early 1970’s, she was a part of the back-to-the-land movement, relocating briefly to a rural community in Wisconsin and then to 150 acres in East Tennessee where she lived for 31 years and attempted to live off the land that she tended. Life led her back to Minnesota again where Linda received local attention for her yard in Northfield that she transformed into an urban farm that helped feed her and her husband.

Continuing a lifestyle that’s healthy and fulfilling for both consumers and the earth, Linda works in tandem with Executive Chef Jon Nolden to create a “green food loop” at Trillium Woods. She delivers fresh vegetables just in time for meal preparation and then collects the kitchen’s vegetable scraps for composting to enrich the soil on campus.

Linda has put her deep-seeded passions and values to work here at Trillium Woods, and we’re so thankful for all she’s done to benefit her friends, neighbors and community.

This is for testing purposes